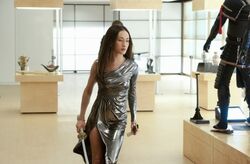 "Coup de Grace" is the thirteenth episode of the first season of Nikita.

Alex's first assignment is a group mission to kill the Prince of Georgia at a museum gala. After Alex tells Nikita about the order, the two devise a plan to foil the assassination. However, Nikita trusts the wrong person and their plans are foiled, resulting in a stand-off and alerting Division that Nikita is in the building. Percy sends Michael in to kill Nikita.

The episode begins with Alex and Nikita watching a show where the Prince and Princess of Georgia are promoting their tour of crown jewels in America. They explain that they both come from a line of royal bloodlines and that Princess Kristina is very proud of her heritage. Alex mentions that this may not be the fairy tale love that the media is touting.

Alex is given her first assignment as a fully fledged agent of the Division. She is asked to assassinate Prince Eric of Georgia at a museum gala in New York City. Nikita must figure out how to stop the assassination without exposing Alex.

Nikita poses as a jewels expert to get to the Princess and warn her about the danger that Eric is in. She hopes she can get some help from the Prince's wife, but it turns out she's in on the plot and incapacitates Nikita with a taser. Upon waking up, Nikita subdues her captor and quickly comes to the rescue of the Prince just as members of the Division raid the gala event under the guise that they are Georgian rebels.

Safe for the moment, the Prince explains his marriage was merely a business arrangement and it's his assistant, Leila, whom he truly loves. They're still in danger, but he won't leave the museum without her. Nikita tries to keep the Prince safe as Division agents look for Nikita and Eric. In a spectacular display of action, Nikita manages to take out several Division agents while only getting a cut on her leg to which the Prince tends.

Alex, desperately trying to help Nikita while keeping her cover, calls the police so that her team will be forced to evaucate. Unfortunately, Michael arrives with a team posing as the FBI to control the situation. Since the Prince will not leave without Leila, Kristina decides to flush him out by pretending to kill Leila. Alex thinks quickly on her feet and breaks one of Leila's fingers so that Division and Kristina will not kill her.

Michael manages to keep the situation under wraps from the scrutiny of the media as Leila and Eric are reunited and are safe. Although Michael sees Nikita leaving under guise of an FBI uniform, he decides to let her go.

Later, the Prince is giving a press conference on Kristina's deception and his duty as the prince, suggesting that perhaps he cannot be with Leila at the moment. As Alex and Nikita relax after their mission, Michael calls Alex for a debrief and questions her about Nikita. Alex keeps calm, but the last scene shows Michael viewing the tapes of Alex's interaction with Nikita, suggesting that he may know more than he let on.