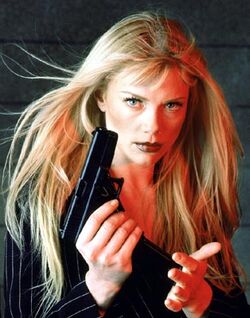 Recruitment to section one[]

At the beginning of the series, Nikita is falsely accused of killing a police officer, is sentenced to life in prison, and finds herself recruited to section one, where she is told her death was faked, and would become true if she would not agree to become section's agent.

In the season 3 episode Outside the Box, she first finds out that section has not only blackmailed her into service after being wrongfully accused, but in fact framed her with the murder to begin with. She finds the agents responsible for her framing, but they are eliminated and all of their records are deleted from the system once she tries to uncover the reason for her recruitment.

Two seasons later, in the 5th season, Nikita discovers the real reason she was taken into Section — her father was Mr. Jones the head of Center, the organization controlling Section. (Which had seemed to be autonomous in the beginning of the series) His plan was to make Nikita take over as head of Section One and eventually Center. At the series finale, he sacrifices himself in order to achieve these goals.

As the only truly innocent recruit into Section, her compassion and sympathy constantly conflicts with the often ruthless orders she is given. After spending two years being trained by Michael, Nikita learns to use her beauty as a weapon and becomes an expert in martial arts and ordnance. Initially reluctant to kill (she uses creative measures to avoid having to commit a murder during her first mission), she eventually becomes more efficient at doing so. She is used in a wide variety of capacities, from "valentine operative" to assassin, despite her moral qualms, but manages to hold on to her humanity while working for the organization.

Eventually, Nikita and Michael become romantically involved, a development that threatens not only their standing in Section One, but their very lives. Their relationship is seen as a threat by Operations and Madeline, and they use a mind altering method on Nikita to rid her of all emotions. Michael manages to alter the progress, but Nikita's performance takes a more professional tone.