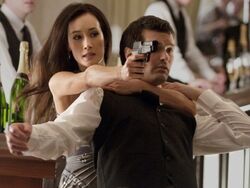 "Pilot" is the first episode of the first season of Nikita.

When she was a deeply troubled teenager, Nikita was rescued from death row by a secret U.S. agency known only as Division who trained her to be a spy and assassin. Nikita was eventually betrayed by the only people she thought she could trust. Now, after three years in hiding, Nikita is seeking retribution and making it clear to her former boss, Percy, and her former friends, Michael and Birkhoff, that she will stop at nothing to expose and destroy their covert operation.

Division continues to recruit and train other young people, among them Jaden and Thom, erasing all evidence of their former lives and turning them into cold and efficient killers. One of these new recruits, Alex, is a beautiful girl with a violent past and a story not so different from Nikita's. The recruits all spend part of their training with Amanda, a master manipulator who can turn any ugly duckling into a swan and any bleeding heart into a killer.

Nikita narrates her life in Division where she was recruited by a secret government agency that turned her into a killer. She will stop it at all costs. The show kicks off with a robbery at a pharmacy. Two people with rabbit masks clear off the shelves. One of the robbers keeps looking back that their partner when a clerk grabs the gun that the robber is holding. He is about to shoot one of them but is shot in the back before he can do it. They rush out but one of the robbers trips and the drugs go everywhere.

The police arrive and pull off the robber's mask. It is a girl, Alex, from Detroit, Michigan. Later the guards escort her to her cell when she starts fighting. A man watches from behind a jail cell. Alex wakes up in a room, and a man tells her that she is no longer in the prison. He says her death was faked along with her remains. He tells Alex that his name is Michael and explains that they are going to give her a second chance. He also tells her that she killed a guy that they have been trying to catch for years.

She protests; Ronnie killed the guy, but Michael tells her that Ronnie was found dead of a drug overdose. From now on, she will learn how to walk, talk, sit and act right; and learn how to serve her country instead of herself.

Meanwhile, at a pool party, a man sees Nikita and orders her to have a drink with him. But he tells her that she is going to have to get wet since it is a pool party. She walks over to him and says killing the bodyguard is going to be harder now. She snaps the man's neck and kills two bodyguards along the way. She gets on the communicator, radios that the target is down and needs to get out. But Michael says that extraction is impossible, and she could never get out.

He is behind her, points a gun and pulls the trigger. Nikita wakes up from the nightmare in Roselle Park and starts her car with a pliers.

She visits a man named Gary and calls him "Daddy". He recognizes her as his daughter Nikita. She grabs his throat and throws him. She says that after she ran away, she got into a tough crowd and into drugs. She says then she got arrested for killing a cop and was sentenced to death. She says her life was spared by a secret division of the government called Division where she was trained as an assassin but broke their only rule: She fell in love with a civilian named Daniel.

She knows that he keeps tabs on Division and says that she wants them to know that she is coming. She is going to strike deep and make them pay for what they did, she says.

Michael meets with Percy and discusses a new mission. Percy has a new mission for Michael: kill Nikita. Meanwhile, Alex sits down at a table. A girl sees her and sits next to her, instigating a fight. Alex throws her food at the girl and puts a fork to her throat. A boy runs over, grabs the girl, introduces himself as Thom and the girl as Jaden. He explains that Jaden is still new and is getting used to the rules. She says that Thom is excited because he is going on his first mission.

Thom says that he has been there almost a year and that they need to stick together if they are going to get through training. A man tells Alex that Amanda wants to see her now.

Michael gets to Gary's. He says that the FBI is paying for everything. He asks what Nikita's tone was, but Gary says that he doesn't remember. The other assassin gets tired of listening to Gary and kills him. He says that Nikita knows what they were going to have to do. Nikita walks up to Daniel's gravesite and flashes back to her time with Daniel. He gives her an engagement ring, and she says that he needs to promise her that it's not a dream.

Alex meets Amanda who says that she will show her how to use her beauty. Alex says that she is not going to smear makeup on her face. Amanda says that it is not the first time she has had to reinvent herself. She recognizes that Alex is from the Ukraine and has worked on getting an American accent. Amanda says that they can help Alex get to be useful for herself and not just a waste of space. Meanwhile, Birkhoff and a team go to the gravesite, and they see Nikita still kneeling at the grave.

They open fire but find it is not Nikita but a mannequin. Birkhoff says that she is on the move up north, but Nikita shows up in the back seat of the car. Birkhoff asks what she is going to do, and she says that he will see. She smacks him on the head and steals the truck. She takes him back to a hidden place, and she says that she wants access to Division's network. He tells her to kill him because Percy will kill him.

At Division, they track Birkhoff and go to a park. When they find Birkhoff, he is tied to kids' playground equipment. He says that Nikita is long gone. Back at the training ground, Alex sees what they are getting into, and Jaden says that Thom is just stressed over the mission. She says that she is jealous that she is not going to be able to kill anyone yet. Jaden tries to get Thom to talk about the "Black Arrow" mission, but he says that he can't tell.

Alex looks surprised when Jaden says that she wants to kill someone, too, then Jaden laughs. Alex asks what they are in there for anyways. Jaden says that they are being trained to be killers, and if they don't kill, they are killed instead. In Percy's office, Birkhoff says that Nikita told him that she is working with other people, but he thinks that she is alone. Michael is not sure whether or not to believe Birkhoff, but Percy does. Percy says that he has to go to a meeting and says that "Black Arrow" is still a go.

Back at Nikita's hideout, Nikita gets ready for the "Black Arrow" event at the hotel and gets her weaponry ready.

At the Wyckland Hotel, three men are in a hotel room, and they radio to Guardia downstairs to get the car ready. He says that it is ready. A hotel worker grabs Guardia's water and puts something in it without anyone noticing. This causes Guardia to rush to the bathroom where he is met by Thom dressed as a doorman, too. Thom puts Guardia asleep and says that it is going to be easy. But Nikita walks into the bathroom, fights with the two assassins and knocks them unconscious.

She goes upstairs and shoots the billionaire with a taser gun. She loads him up on a serving cart and covers him with a blanket. The same man that killed Gary from earlier is there. He is met by the billionaire's body guards. The man slices their throats, and Nikita runs for it hauling the Billionaire with her. She makes it to the car and drives to the United Nations. She says that a government group named Division tried to kill him and that she wants to see them shut down.

Back with Alex and Amanda, Alex asks for her help. Alex puts scissors to Amanda's throat and says that she is going to get her out of there. She says that she doesn't want to be a killer, but Amanda says that they are only there to protect their own. Meanwhile at the Centennial Foundation, Percy meets with John, who says that he has had some accusations of illegal kidnapping. Percy says that he and his team will handle it. Percy walks up to Michael, talks about Nikita and how "Black Arrow" was blown.

He wishes that she would show her face and suddenly Nikita walks in. She has a senator on her arm and says that it was her meal ticket in. Percy says that he didn't come alone, and he asks her if she wants to take the easy way or the hard way. She grabs a guy's gun, shoots Percy's cover and runs off. Michael catches up to her and points his gun at her. She says that he needs to give her a head start so that she can take Division down.

Back at Division, Nikita gets moved to the top of their objectives, and everyone is going to be on the case. Meanwhile, Nikita chats with someone online, and they tell her that they are working Division from the inside. Nikita tells the other person to log off. The other person is Alex. Nikita says that she has to log off and do what they have trained her to do. Michael walks up while Alex closes the chat box, and Alex says that she is never going to pass the little test.

Michael says that he knew a girl that said the same thing, but she eventually learned it. Nikita logs off the computer, and the camera shows that Nikita has the other mask from the pharmaceutical robbery from the beginning of the episode.