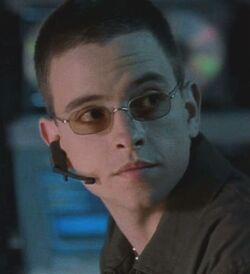 Name
Seymour Birkoff/Jason Crawford
Birthplace
Birth date
Family
Version
90's
Seymour Birkoff is Section One's resident genius, whose computer abilities are legendary, and who, as the head of Comm, supervises Section missions in progress. He and Walter are close friends despite their wide difference in age, and even Nikita is especially fond of him. It isn't until many years later that Birkoff learns he was one of two twin boys born to a Section operative. The boys became the subject of a Section One psychological comparison, in which Birkoff was kept within Section One, while his brother Jason was adopted by the Crawford family outside the organization. This was due to a fateful flip of the coin by Walter, and when Birkoff discovers this, it permanently strains their relationship. Birkoff's new obsession with leaving Section One leads to the creation of an artificial intelligence program to take his place, in order to create more downtime. Unfortunately, the A.I. becomes self-aware, and Birkoff sacrifices himself in order to stop it. Quinn replaces him as the head of Comm. His brother Jason is later recruited by Section One.
Retrieved from "https://nikita.fandom.com/wiki/Seymour_Birkoff_(90%27s)?oldid=4861"
Community content is available under CC-BY-SA unless otherwise noted.